Pete's Plan to Win at Solitaire 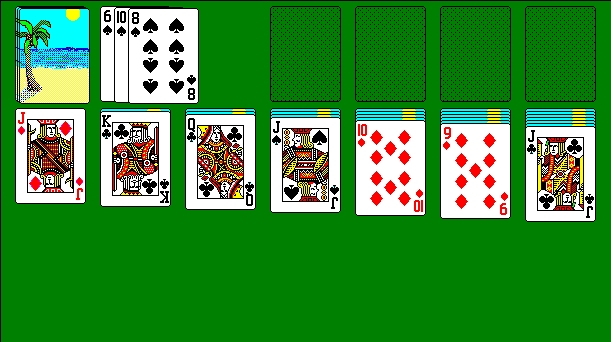 
Contents of My Solitaire Page:

4. Why the Rules Work

5. Getting Rid of Windows 7 Solitaire


Pete's history of playing solitaire:
I started playing the traditional (klondike) solitaire, the game where you deal out 7 columns of cards with one on the left stack, two on the next, etc. when I was about 8 years old. I quit when I was probably 12 or 14 for many years, except for an on and off shot at it from time to time.

Then came personal computers at the office. ----Not till many years after MS Windows stuttered into existence (it really wasn't even a whole program at release 3.1) did I leave the DOS environment for that infamous blanket that covered up everything I really needed to do with inane little pictures and requires three hands to operate efficiently. When it finally got to the point that I was having lots of file transfer problems with others who had learned their computer basics in the Windows environment did I finally fall.

Well, it was then that I started playing solitaire again; on the computer, of course. At first I needed it to learn the mouse. But how long does it really take to learn to point and click when you are "pointing and clicking" for real for 2 or 3 hours a day? Shouldn't Solitaire automatically disappear from every computer on earth after it has been opened a dozen or so times?

No such luck. I found myself invoking its drug-like power all too often when my brain did not want to apply itself to the task at hand. The thing is: I kept playing solitaire on and off for several years, until I finally retired at the end of 1996. By that time I had gotten control of myself so I wasn't a slave to the game. But the point I need to make is this:
in all that time, I simply opened the program and played each game as it came to me. I used the simple rules that I had learned as a kid. And, when I finally retired, I used solitaire as a kind of drug for a couple of months while I was getting used to not going to work every morning. Then one day it hit me:

2. This game is, to a large degree, a Statistics Game.


---First you get the hand that the computer deals you. You have (almost) no way to control which cards are where in the deck. So, already your fate is at least biased. Sure, you have certain cognitive skills at hand, but they may be no match for the "luck of the draw". Do you want to simply submit to this or do you want to do something about it?

The law of averages is out there to get me every time I play. I would feel bad that I hadn't win a game, or if I had dealt a dozen or two or three hands without winning.
So, I got to thinking: okay, what can we do to take control of this situation?
Answer: decide what my goal is.
Answer to that: Win as many hands as possible in the shortest amount of time. (So that I feel good about having won).

Now, in analyzing that goal, I needed to work from where I was down to the root of the problem.
---Since the cards are randomly shuffled by the program (or by hand), and since any card could be anywhere, screwing up my game, I decided that I would only play hands that biased the game in my favor. Next, I needed to develop a profile (or profiles) of opening hands in order of value to positively bias the game.
Here's the Dashboard of the program that I developed to evaluate each hand that you deal:

Once the profiles were developed and recorded, I needed to evaluate the actual playing process to optimize the ORDER of play to minimize downstream complications and therefore maximize my likelihood of winning.

See, I always thought that THE goal of the game was to build up the ace piles as fast as possible and so every card that I turned over was immediately evaluated for its fit on the ace piles and that was that.
But, in reality there are several goals, (or priorities) to the game, and they need to be addressed in a certain order.
First Priority: Empty 4 columns of cards asap so you are ready to take advantage of any available Kings.
Second Priority: Put up aces asap. The idea here is that the more options you have for placing a card, the more control you have over how to play cards that become available.
But, once an ace is up there on an ace pile and the deuce has been put on it, don't put a another card on top of it unless there is a good reason to do so.
Third Priority: Empty all the other columns of cards asap, down to the last card (but don't put that last card anyplace else for a while) so that you have all possible cards available in play.
Fourth Priority: Build the aces piles, but don't get them out of balance, if at all possible. That is; don't go building up one suit past the 4 or 5 while another suit is still waiting for a three (see second priority).

How to choose game options:
There ARE NO options! THE only real way to play solitaire is to draw three cards.

Why do you play it?
If you just play to pass your time away, then, it doesn't matter how you play. If you do want to compete with yourself, do you want to test your competency or just your patience? Your competency goes far beyond just taking a chance that the cards will be in your favor.

What I could one do better?:
I am not very good at remembering all the cards in each "turn-over" of three cards. If I watched this more closely, then I could legally manipulate the deck even more to my advantage. I do, however, look to see if I have a fatally flawed hand in the stack. For instance, if I see that 3 of the columns have 6's on top and I notice that I have NO 5's in the stack, I may just abandon the hand, even if there's still a "dribble" of activity.

Feeling good about playing solitaire is:
My goal is winning as many games as I can in the time I have available to play. So, I don't mind dealing several hands before finding one that I want to play. The alternative is playing hands that that I don't win or hands that I'd have a low probability of winning anyway.
So, I divide my time between evaluating the hands as they are dealt, playing only the most promising ones and abandoning uninteresting hands.

Play to win:
I have defined "winning" a game as simply getting all four suits evenly aligned on the board, with no more on the aces piles than absolutely necessary. For example; all four aces piles filled to the fours. In that case, all four suits are represented in columns from the King down to the five. As soon as that is accomplished, I declare a "win".
A win with all fives in the columns is a better win (and almost ALWAAYS faster) than if I win with all jacks.

See the two links at the top of this page for my rules and why they rules work.

5. Getting Rid of Windows 7 Solitaire


A while ago I got a new computer and it came with Windows 7. If you have Windows 7, you know that it does, indeed have Klondike Solitaire as part of the operating system. So far, so good. But, it's different in many ways. You have to click more times than before to get a new game and it has some other things I don't need. The "options" menu won't get rid of the things that bug me the most.
But the worst thing is, that I just can't play as fast with the Windows 7 version as I could before.
I couldn't put my finger on it, but it just seemed harder to decide what the next move should be. I thought the mouse controls were part of the problem and, after taking 'way too long to find them, made several changes, which seemed to help a little.
But even then, things just didn't seem to be going well and I was definitely winning fewer games. The ones I did win took at least 50% longer, too.
I thought I was loosing my vision or that maybe old age was setting in. Then I decided to Google my problem. I found many others who had the same problem, several of whom said that they had actually decided to quit playing Solitaire because it wasn't any fun any more!!!!

I had thought of trying to copy my XP solitaire game onto the new computer, but I had already had enough trouble getting older software to run that I didn't want to go through a lot of hassle.
Well, Here's the solution!!!!! You CAN copy XP's solitiare to your Windows 7 machine.
Some nice guy figured it out and here's how to do it:
Get the XP files named sol.exe and cards.dll from somebody who still has XP and put them into the Windows directory of your Windows 7 computer. They aren't very big, so they will fit on almost any flash drive, under 300Kb for both of them, I think.
Note-Note-Note!!!:
On my old XP computer, they were both in the directory: c:Windows\System32. DON'T put them into the System32 sub directory on your Windows 7 computer, just put them into the Windows directory.
Now, navigate to the "sol.exe" file and double click on it. Solitaire as you know and love it should appear.
If you want an icon for it on your desktop (I did), just navigate back to the sol.exe file and right click on it. Select "Create Shortcut" and put it on your desktop. Note that the dumb program tells you that you can't put the icon on Windows Explorer and asks if you want it on your desktop--- well, yah!
That's it. Life is back to normal.
!!!!Please---- if this doesn't work for you, please let me know so I can change this..
I made that change in April of 2011 and was so glad it worked that I had to add the information right away.
So, if I "jumped the gun" tell me, please, using the "Contact Us" link above Also, if it did work, I'd like to hear a little of that, too.


This page will be under construction forever.