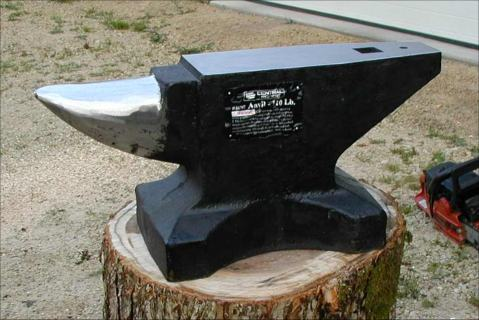 I am sorry to say that it seems they don't import this one anymore. I had heard of some people having trouble getting them, but then, I did find them at the stores in the Minneapolis/St Paul area. Now they tell me that there won't be anymore of them.

I bought mine at local stores. There were even a number of people who were selling them on Ebay, without ever actually owning them. I guess they had Harbor Freight drop ship them. Maybe that's what screwed the deal up.

You may still be able to find them, used, on Craigslist or on Ebay.

This is the first STEEL anvil I have seen in the Harbor Freight catalog. It normally sells for about $80, but was recently on sale for about $70. I had been wondering if it might be a serviceable tool, particularly for the beginning blacksmith. Having seen many, many beat-up used anvils in the 90 to 150 pound range sell for well over $1.50 per pound, I thought that someone should get one. So I did.

Someone told me that this anvil was hardened. When I called the local (Mpls/St. Paul) store to ask, they told me that it was not hardened. I tested the face with a new file and as far as I can tell, the face IS harder than the horn.

The anvil comes with a milled finish on the face, possibly from a fly cutter. The cutter marks were about 3 or 4 thousandths deep in some places. A person could eliminate those marks in a little while with an angle grinder using a soft disk of about 80 grit.
I put my anvil on the surface grinder to clean it up. There was one small pit left about an inch from the hardy hole. I was about 1/16" round and probably 1/16" deep. Much to my surprise, the base and face of this anvil were within about 12 thousandths of parallel with eachother! It took only about 15 thousandths to totally true it up. I have ground many anvil faces over the last several years and often had to deal with differences of as much as 1/4" or more.

As I ground the face on the surface grinder, the sparks suggest a medium carbon steel with some sort of mild alloying material.

The horn and step are left as-cast. The whole anvil except for the face, is painted black. I took the 7" body grinder to the horn to clean it up and to shape it.

This anvil ought to make a great first anvil at its current price, particularly if you can avoid shipping charges if you live in a city that has a local store. But I have heard that Harbor Freight sometimes ships for free if you spend more than $50 or so.
The only caveat is this: I never even hit this anvil once! I bought it to examine it and I did. I gave it away immediately after I finished working on it.. As it drove away, headed for Rockford, Illinois (I'm in west central Wisconsin), it occurred to me that I hadn't even laid hot iron on it! ---Later, I bought another one, for myself, and have found that it is rather soft. But I still think it's a good buy.