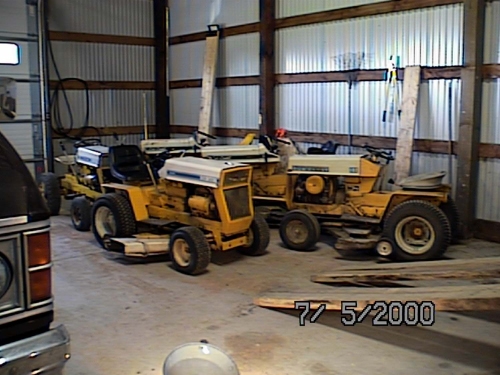 My 127 started fine but had hardly any power until at least 10 minutes of mowing. This had been a consistent problem for over one mowing season. I didn't worry too much about it since we have several others around. I just figured that I'd let it go until it quit and then worry about fixing it. Well, it never did quit and I finally go tired of having to mow at a snail's pace for the first 10 minutes each week.

I examined the points and found that they were hardly opening at all! (I couldn't visually detect any movement as I rolled the engine by hand). They HAD to be opening, because the tractor did run.
I replaced the points and set them at 0.020" gap and the problem disappeared immediately.

Pete's analysis of the problem:
The machine acted as though it was running with the spark retarded considerably until it warmed up. There was NO missing or backfiring, so I doubted that the problem could be carburetion. Besides; the choke and throttle acted normally.
The engine (K301) has a compression release built in to the exhaust valve cam, so there is no spark advance mechanism whose failure could contribute to this problem.
Just in case, (and because it was easy to do) I had tried a new spark plug to no avail. What made the problem so hard for me to understand was "Why would the engine ALWAYS run fine after about 10 minutes???"

Answer: The push rod for the points is an aluminum rod about 1 1/2" long. This rod stretches as it gets hot and causes the points to open enough more that the timing is affected toward the advanced side. That points push rod is located 'way down toward the bottom of the engine and so, takes a while to heat up.

Aluminum stretches about twice as much as steel does. I calculated that the pushrod would grow about 0.0035" as it heated from about 60 degrees F to about 250 degrees F.

On the K301, the points cam holds the points OPEN most of the time. This means that the points close for only a short period of time (dwell);--- a small angular percentage of the rotation.
When the points do close, current begins to flow through the ignition coil to develop a strong magnetic field . This takes some time, since the inductance of the coil tends to oppose this build up.

When the points open, this magnetic field collapses much more rapidly than it built up and it is THIS action that creates the spark at the plug.

The exact crank angle at which this opening of the points occurs determines the "timing" of the spark in relation to the position of the piston in the cylinder.


The points cam has to be designed to have a slow enough rise and fall to keep the from bending or wearing out the pushrod. This means that the gap of the points will affect the firing timing because the width of the gap determines WHERE on the cam the points open and close. If you have a small gap, then the points are only affected by the "outer edges" of the cam (which are fairly far apart). If you have a large gap, the points are affected by the inner edges of the cam (which are fairly close together).
I estimated the diameter of the cam, the depth of the lobe, the diameter of the pushrod and the width of the bottom of the cam, then estimated the slopes that would be necessary to avoid bending or rapidly wearing it out. I drew it out on a CAD program and added a few angles to estimate various points-opening situations, including the problem that I had with my tractor.
After all that, I estimate that the situation I had could have retarded firing by as much as 30 degrees. This engine is supposed to run at 20 degrees advanced, so this condition could (and probably did) cause the engine to fire at 10 degrees retarded when cold!!! The stretching of the pushrod apparently moved this retardation back several degrees, to a point where the tractor had adequate power. (It now runs better than it has in years and burns about 25% less fuel. Unforunately, during the time this problem was going on, the overheating scored the piston and the cylinder wall enough that I eventually had to rebore the cylinder and replace the piston!

If there's a MORAL in this lengthy story, here it is:
The "precision timing" that is referenced in the manuals can be a lot more critical than I ever thought it would be.